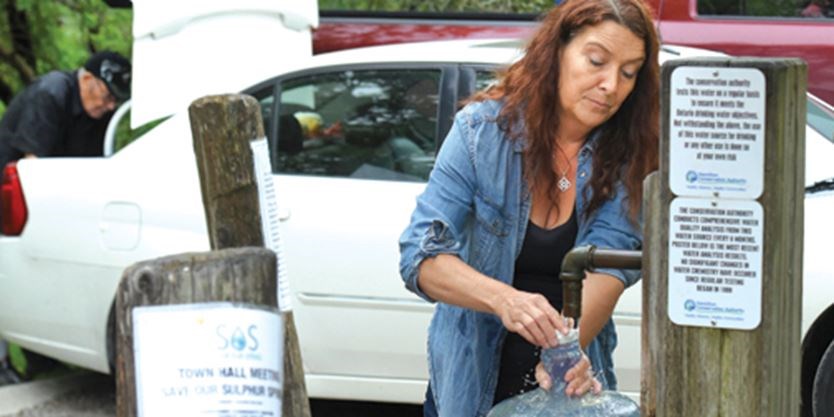 Joanne Turnell of Save Our Spring fills up a water jug at the Ancaster well. – Hamilton Spectator file photo

The war of words over the Hamilton Conservation Authority’s move to limit public access to a popular Ancaster artesian well is boiling over, with hints of legal action against a group of diehard opponents.

Ancaster Coun. Lloyd Ferguson raised the possibility of getting a restraining order against Save Our Spring at the Dec. 7 board of directors meeting, objecting to “slanderous comments” about his role in the dispute.

These include describing him, in a letter and on the group’s website, as a “champion of only one solution, privatization” and as an opponent of reclassifying the well “to allow free continued access,” he said.

“I don’t know where that comes from. It’s not true,” Ferguson said before agreeing to defer any discussion of legal action to a private session later in the meeting.

If my councillor wants to take me to court for challenging his decisions, then I’m up for that.“I think all of you know I’ve never once raised selling this to Nestlé or any other private operation,” he said. “They’re not telling the truth.”

Contacted afterwards, Ferguson said the authority is taking action but he can’t divulge details because they remain confidential.

Save Our Spring is the remnant of an original group of the same name formed to fight the authority’s initial plan to close the well because the water’s arsenic levels are above a new limit of 10 parts per billion that takes effect on Jan. 1.

The original group splintered in October after holding a meeting at which most of those on hand accepted Ferguson’s alternate solution to fence the well and introduce a swipe-card entry system in the new year.

To gain access, people must pay a one-time $10 fee for the card and sign a legal waiver acknowledging the water isn’t for drinking.

Save Our Spring member Joanne Turnell, author of the letter that raised Ferguson’s ire, said the councillor is being singled out because he came up with a solution she believes is opposed by an “overwhelming majority” in the community.

She said the fence is “illegal” because it makes the well site private property, going against a land deed provision requiring open public access to be maintained.

Turnell said Save Our Spring believes all that’s needed is a sign warning of the water’s higher arsenic levels.

That’s a view also being put forward by a second group fighting the access restrictions, known as Protect Ancaster Wells.

“If my councillor wants to take me to court for challenging his decisions, then I’m up for that,” Turnell said. “The fence is illegal. Whether he likes that or not, that’s the truth and that’s not slanderous.”

At the Dec. 7 meeting, chief administrative officer Lisa Burnside said just posting a sign is not an option because both the authority’s lawyer and the public health department agree the well is a small drinking-water system subject to the new arsenic limit.

The authority’s testing in recent years has consistently found arsenic levels range from 17 to 23 parts per billion, below the existing maximum of 25 for the carcinogen.

“It has to be restricted public access and the way we came up with that is fencing and a swipe-card system,” Burnside said. “People sign a waiver acknowledging they realize the water’s not tested and will exceed arsenic limits come Jan. 1.”