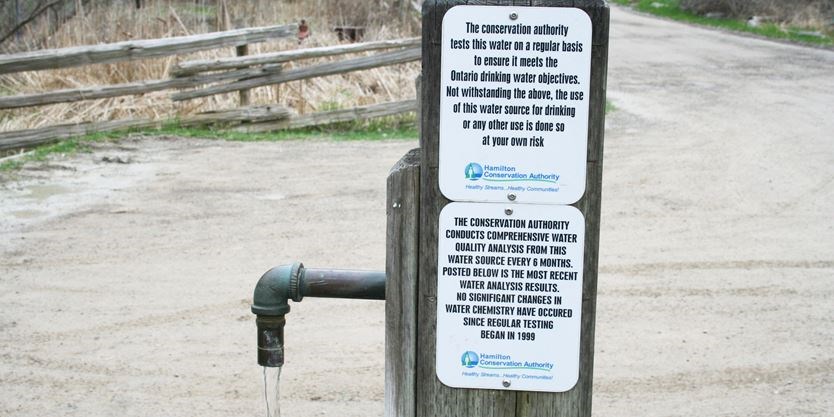 To the surprise of its citizen advisory board members, the Hamilton Conservation Authority will stop testing a popular Ancaster artesian well once access is restricted to people who sign a legal waiver acknowledging the water isn’t for drinking.

Chief administrative officer Lisa Burnside said the city’s public health department and authority’s insurer and lawyer have all endorsed a plan to fence and limit access to the Sulphur Springs Road well with a swipe-card entry system.

She said those measures and the waiver will end open public access to the well, so it will no longer be classified as a small public drinking water system.

As a result, a new regulatory arsenic limit of 10 parts per billion that takes effect on Jan. 1 won’t apply, Burnside told members of the authority’s advisory board, which in April recommended the well be closed by the end of this year.

We all know people are taking this for drinking water. We all know. That’s what they’ve done in the past and that’s what they’re going to do in the future.“The water will no longer be tested,” she said. “They are assuming their own liability and risk.”

Burnside said signs at the well will still warn the water has elevated sodium levels and exceeds the arsenic limit.

The authority’s testing in recent years has consistently found arsenic levels range from 17 to 23 parts per billion, below the existing limit of 25 ppb.

“If people are interested in having the water tested, they can pick up bottles at the municipal centre and have that water tested,” Burnside said.

Some advisory board members didn’t hide their skepticism about the solution, approved by authority directors in October.

The former Mountain city councillor questioned what happens if arsenic levels rise or the gate is left open and “Joe Public” gets access to the water.

“We still own it,” O’Sullivan said. “We still have no liability?”

Another member said he didn’t feel reassured by the waiver.

“So, if somebody comes back in the future (they can say), ‘But you knew they were going to drink the water, even with the paper.’ I always find waivers to be weak pieces of legislation.”

Burnside reiterated the waiver and restricted access will end the well’s classification as a small public drinking water system and said staff will regularly inspect the site to ensure ongoing compliance with those conditions.

“What people do with it, whether they’re watering the garden, taking it for washing clothes, that is up to them. They’ve been informed it’s not provided for drinking water purposes,” she said.

“They’re informed that it has levels of arsenic and sodium in it and it’s no longer tested.”

Burnside said she expects the fencing and swipe-card entry system to be in place and approved by the city’s public health department by Dec. 1.

Those wishing to use the well will pay a one-time $10 fee to get a swipe card to cover costs, she said.