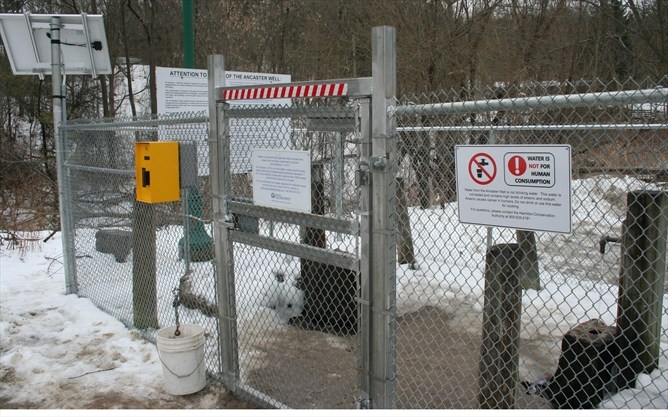 The Hamilton Conservation Authority is encouraging people who purchased swipe cards for the Ancaster well to renew them before they expire.

Chief administrative officer Lisa Burnside said access codes on the $10 cards are only good for a year and need to be updated at no charge.

Users must also sign another annual waiver indemnifying the authority of any liability and acknowledging the Sulphur Springs Road well’s water isn’t for human consumption because it exceeds provincial limits for arsenic.

Burnside said about 700 people have bought cards and the first year has run smoothly, other than for a single instance of vandalism in May that shut down the entry system over the Victoria Day weekend.

Judging by all the pass holders that have come in and the lack of any issues, I’d say it’s working fine. — Lisa Burnside“We haven’t had a problem since then,” she said.

Amid heated opposition from some users, the authority’s board of directors last year approved Ancaster Coun. Lloyd Ferguson’s proposal to introduce the swipe-card setup as part of measures to no longer have the well classified as a public drinking water system.

The changes relieved what was formerly Ancaster’s main water source from a new arsenic limit of 10 parts per billion that took effect on Jan. 1 and threatened to permanently close the well.

Though no longer tested, the carcinogen’s levels have typically ranged between 17 and 23 parts per billion — below the old maximum of 25.

A prominent sign at the well also cautions the “water is not for human consumption,” with a second sign providing details on the elevated arsenic and sodium levels.

Ferguson said he believes the system has worked “exceptionally well” and people tell him they are thankful they can still use the water.

“I think that it’s actually exceeded my expectations, when you still see that many people using it,” he said. “I haven’t heard a single complaint.”

A local group called Save Our Spring fiercely opposed the restricted entry, which took effect on Jan. 1, but last posted an update on its website during May’s temporary shutdown.

Its petition seeking to overturn the decision is now closed after getting 756 signatures.

“I think most people were just happy or pleased that some sort of satisfactory resolution was gained that satisfied public health; that you could have access but under certain restricted conditions,” she said.

“Judging by all the pass holders that have come in and the lack of any issues, I’d say it’s working fine.”

This story has been updated from a previous version.