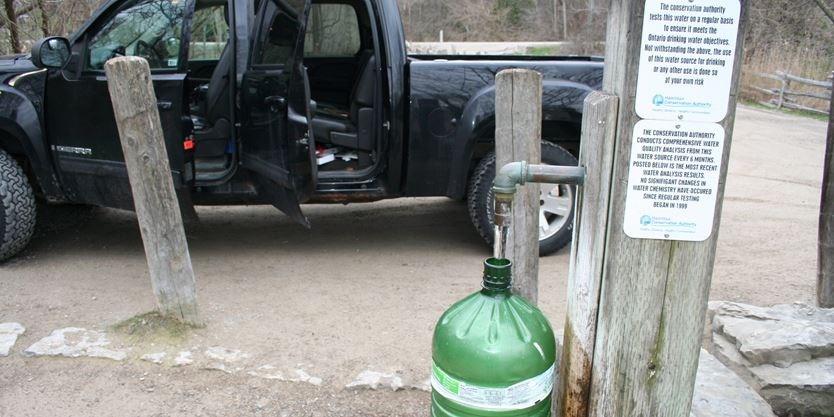 Ancaster Coun. Lloyd Ferguson says he wants the city to see if there’s a “reasonably priced” way to remove the arsenic in a popular Sulphur Springs Road well’s water to allow it to remain open to the public.

He said he plans to introduce a motion at the Aug. 17 public works committee asking for a staff report on potential treatment options.

The well water’s arsenic levels typically range between 17 and 23 parts per billion — within the existing limit of 25 but about double the new standard of 10 set to take effect on Jan. 1.

The new limit on the carcinogen has prompted owner Hamilton Conservation Authority to signal plans to close the well by the end of the year.

“The conservation authority are not water people; they’re conservationists and they look after natural areas,” he said.

“Maybe (we can) arrange through the city budget, if it’s reasonably priced and it will work, to have the city do it because they’re the water experts.”

Ferguson proposal for a possible city-led solution came a day after Save Our Spring, a group dedicated to keeping the well open, held a second public meeting at the Copetown Community Centre that drew about 70 people.

Following an open discussion where many on hand indicated they rely on the well for their drinking water, the meeting broke into smaller groups to discuss three tasks set by organizers.

These included finding a way to survey how many people use the well and why; reviewing arsenic levels in bottled water and juices; and researching possible legal strategies to keep the well open.

Chris McLeod, a member of SOS’s steering committee, suggested the well is wrongly classified as a small drinking water system, requiring it to meet the same standards as city water.

He said there are two other classifications, for spring water and mineral water, which have less stringent standards.

“It can be something as simple as, well, let’s change the language so that’s actually more accurate because we do not consider that to be a small drinking water system, but we actually consider it to be a mineral-water source that we are all bottling for free.”

But the conservation authority manager who is recommending the well’s closure threw cold water on the idea of reclassifying the well when contacted the next day.

Matt Hall, director of capital projects and strategic services, said Hamilton’s public health department has classified the well as a small drinking water system, a view confirmed by the authority’s own legal advice.

“We’ve explained that to that group a number of times and they still seem to be adamant that there might be a way around it,” he said.

“We haven’t been informed or found a way around that. In fact, we’ve been told this is what it is and that’s why it has to comply.”

According to Health Canada, a population of 100,000 people drinking 1.5 litres of water with arsenic at 10 parts per billion for 70 years could expect three to 39 additional lung, bladder or liver cancers when all other factors are excluded.

That compares to an additional eight to 97 cancers drinking water at the present limit of 25 parts per billion.