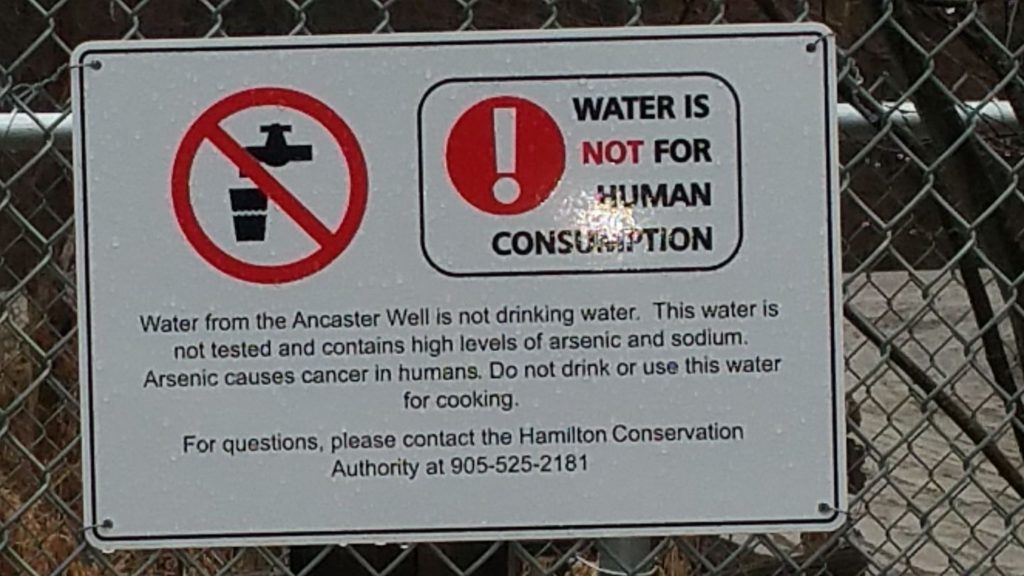 Surely that alone must raise your hackles – of course water is for Human consumption.

Please note that there is no referring health clause or legislation noted on this sign – it is entirely the creation of the Hamilton Conservation Authority – by their own decree.

Inorganic arsenic refers to arsenic atoms that occur in their pure, metallic form, or in compounds where they are bonded to other non-carbon elements, such as in arsenic trichloride AsCl3.

Organic arsenic refers to organic (i.e. carbon based) compounds that contain covalently bonded arsenic atoms. One example of this is 4-Hydroxy-3-nitrobenzenearsonic acid:

The rules around Arsenic are for Inorganic Contaminants and should not be applied to organically occurring Arsenic.

THE ANCASTER WELL HAS LESS ARSENIC THAN BOTTLED WATER

THE ANCASTER WELL HAS LESS ARSENIC THAN APPLE JUICE

THE ANCASTER WELL HAS LESS ARSENIC THAN RICE

The chemical contaminants were promulgated in phases collectively called the Phase II/V Rules or the Chemical Contaminant Rules. These rules regulate over 65 contaminants in three contaminant groups:

Paracelsus, a 16th-century Swiss German philosopher and toxicologist, once famously said, “all things are poison, and nothing is without poison. Only the dose permits something not to be poisonous.”

But can a toxic element really be necessary for life? A growing body of evidence says yes. Some toxic metals, in trace amounts, might actually be essential nutrients, according an analysis in the journal EMBO Reports. In fact, scientists have found that the body needs arsenic, at a level of 0.00001 percent, to grow and maintain a healthy nervous system, according to Chemicool.